After over a decade of low numbers, Japanese beetles have once again become one of the more important problems in Indiana landscapes. Although the reasons for this resurgence is unclear, part of the story is that for the past few years there has been enough moisture in the soil during the mid summer egg laying period to allow most of the beetle eggs to hatch into grubs. These grubs flourished and grew into the adult beetles that emerged the following year. Over the past few weeks, the warm wet weather has created ideal conditions for last year’s grubs to become adult beetles and crawl out of the ground. By now, you should be seeing damage from Japanese beetles if they are going to cause a problem this year.

Japanese beetles rarely if ever uniformly infest a landscape. There are always areas with heavy damage and areas with light or no damage at all. You can determine if Japanese beetle will be a problem in your area by inspecting their favorite plants, like roses, grapes, elms, crabapples and flowering plums to see if they are in your area. 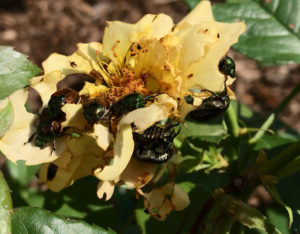 Your first sightings are likely to be on the flower or a susceptible plant. If no flowers are available the beetles will start feeding on plant tops. 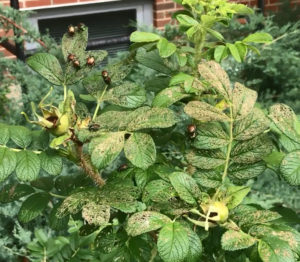 If adult beetles emerge from the soil, why do they defoliate plants from the top down?

Adult beetles will usually fly after they leave the soil to look for leaves and flowers of host plants. When close to an attractive plant they land on the tops of the plant and begin feeding and eventually work their way to the bottom leaves. Other beetles in the area are attracted to the scent of a feeding beetle. This causes beetles to feed in groups. In Indiana, the peak flight lasts for about 6 weeks.

What to do about Japanese beetles?

There are quite a few insecticides that can be used to protect plants against Japanese beetle adults. It can be difficult to kill the beetles without harming pollinators that visit flowers because most insecticides that kill beetles will also kill pollinators.  One of the best ways to protect pollinators and your flowers is reduce the number of times you spray your flowers.  Rather than apply an insecticide when you see the first beetle, wait until you see some beetles starting to feed.  Then wait until more enough beetles arrive before you apply your second spray. This should reduce then number sprays during the spray period.  For more details please see our Japanese Beetles in the Urban Landscape.