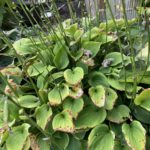 Figure 1. A combination of problems contribute to poor appearance in late summer.

If your hostas are looking a little ratty recently you’re not alone (all the photos here are from my garden). Hostas at this time of year tend to have marginal scorch, dieback, leaf spotting and yellowing . A variety of factors may contribute to these symptoms including environment, diseases and insect pests.

Anthracnose, caused by the fungus Colletotrichum, shows up frequently on hosta and contributes to leaf yellowing, spots and marginal dieback. Leaf spots caused by Cercospora and other fungi, along with slug damage are usually present to some degree and contribute to decline in late summer as well. Insects like blister beetles, grasshoppers and cutworms may chew on hosta leaves and petioles, leaving ragged leaves behind (although you may not catch them in the act). Deer, rabbits and voles all seem to think hosta is a tasty snack, but those problems will have to wait for a future article. 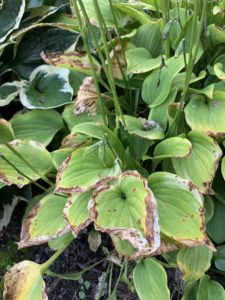 Figure 2. Anthracnose is usually seen together with other problems, like Cercospora leaf spot. 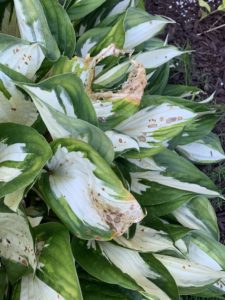 Normal senescence of lower leaves is to be expected, but factors such as growing in too much sun, inadequate soil moisture or excess fertilizer can cause more rapid decline. When hosta is growing in good conditions these symptoms tend to show up later in the year and affect fewer leaves overall. Some varieties of hosta, especially those with light green leaves or heavily variegated leaves, tend to be more prone to these problems than others. Fungicide and insecticide treatments are generally not needed since the main problem is one of growing conditions. 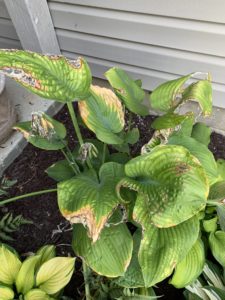 Figure 4. This hosta was robust and healthy in past years but is showing scorch symptoms after being transplanted into a location with more sun and reflected heat from the wall. 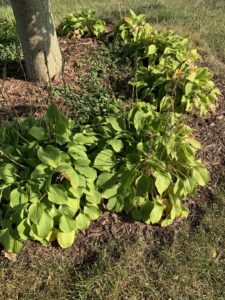 Figure 5. These hosta are struggling with drought stress due in part to competition with the tree they are planted near.

Some suggestions to minimize these problems:
-Select robust varieties that are suited for the location and don’t plant in high stress sites; such as full sun or close to the base of trees where tree roots will compete for root space, water and nutrients.
– Mulch properly to conserve moisture and reduce weed competition
– Fertilize lightly during the spring as new growth begins.
– Irrigate during dry summer periods to avoid extremes in soil moisture.
– Remove all dead foliage and flower stalks after frost to reduce build up of Colletotrichum and other pathogens.

If you run into problems you can’t identify consider submitted a sample to the Plant and Pest Diagnostic Lab: https://ag.purdue.edu/btny/ppdl/Pages/default.aspx