Gypsy moth is tearing through trees in northern Indiana this summer following dry weather in the spring. Although these caterpillars are close to being out of our hair for another year (they’ll stop feeding soon), there are still a few steps you can take this year and next year to protect your trees.

Don’t panic
Gypsy moths (Lymantria dispar) are an invasive pest that occasionally fills the forest with hungry caterpillars. Although they can eat all the leaves on trees and are unpleasant to be around, they rarely kill the trees they defoliate. Most healthy deciduous trees (oak, birch, etc.) can withstand a year of complete defoliation and will produce new leaves later in the summer or the following year. However, if gypsy moths attack coniferous trees (pine, spruce, etc.), sickly trees, or defoliate deciduous trees two years in a row they may kill them. To keep these trees alive they will need protection.

What you can do now

Burlap band method: Gypsy moths can be trapped using a folded over burlap band that catches caterpillars as they make their daily migration from the leaf canopy to the trunk to hide from birds during the day.

Soapy water: Wear gloves and pick caterpillars, egg masses, or pupae off of trees and throw them in soapy water. This method will kill the caterpillars and help cut down on the number that survive your other treatments. Remove and Destroy egg masses after adults complete laying their eggs in August.

Chemical control: It is too late in the year for most people to use chemical insecticides to treat the gypsy moth problem. Most of the caterpillars are preparing to pupate (enter a non-feeding stage) and will no longer be affected by many insecticides. However, if you are interested in trying this method of treatment, you can find more information here.

Be Vigilant
Based on what we have observed this year, the pathogens that often keep gypsy moth populations in check are present, but have not infected enough caterpillars to guarantee a low caterpillar population next year. Therefore, the most important action you can take to protect your trees is to be vigilant this fall and next spring. This fall, make note of how many egg masses you see on your trees and remove any you find. Next spring, look for gypsy moth caterpillars around the time that redbud trees start to flower. Gypsy moths often go unnoticed until they are already big enough to defoliate trees so it is important to keep careful watch on your trees and respond at the first signs of damage. If we have a dry spring it is more likely that we will have another outbreak because the fungi that attack gypsy moth only thrive in humid weather.

In addition to all of the treatment options listed above, you can also try two others next spring:

Trunk injection: You can protect your trees for a year by injecting them with emamectin benzoate before the gypsy moths hatch. However, bear in mind that this treatment can be expensive, only lasts a year, and must be done by professionals.

Areal spray of Bacillus thuringiensis: This bacteria is harmless to humans and other animals but deadly to caterpillars. It can be sprayed from the air over a neighborhood that was infested by gypsy moths the previous year. This treatment is only effective when the caterpillars are still young. You must also have the permission of all of the landowners in a spray area before this treatment can be done.

Get Organized
If your neighborhood had an outbreak of gypsy moths this year, take precautionary measures to prevent another infestation next year. Gypsy moths can move between trees so community wide management plans are the most effective. In addition, many treatments are less expensive if a group of trees are treated at the same time. Remember, gypsy moths seem overwhelming but can be managed with attentiveness and forethought. 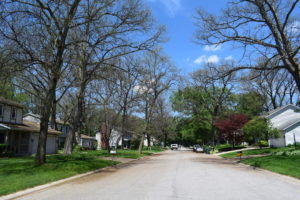 Figure 1. In a street in northern Indiana where gypsy moth caterpillars stripped all of the oak tree of their leaves this summer