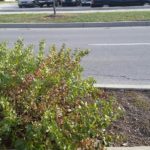 Fragrant sumac (Rhus aromatica) is a low growing native shrub that is valued for its adaptability to many soil types, wet or dry conditions, easy care as a ground cover, and for preventing erosion on slopes. It is often found in highway medians (Fig. 1), in parks or as a foundation planting around commercial buildings. The common name arises from the fact that crushing the leaves produces a lemon-like scent. The most commonly planted form is the variety ‘Gro-low’ which has nice fall color and usually stays about 2 to 3 feet tall instead of the 3-5-foot height of the native type.

Starting in 2010, the PPDL began receiving samples of dying fragrant sumac from several locations around the state, including Hancock, Marion, Porter and Tippecanoe counties (Fig. 2, 3). In each sample the main symptom was a striking internal discoloration of vascular tissue in the stems and crowns (Fig. 4, 5, 6). The fungus Fusarium oxysporum was consistently isolated from stem and crown tissue with internal discoloration, confirming Fusarium wilt as the main cause for decline. 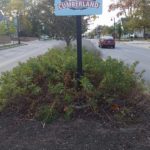 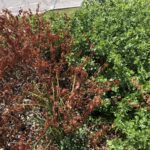 The fungus responsible for the damage lives in the soil and infects through roots when a susceptible plant is present. Fragrant sumac (Rhus aromatica) and skunkbrush sumac (R. trilobata) are highly susceptible to this strain of the fungus. Smooth sumac (R. glabra) is not likely to be susceptible, however Fusarium wilt has also been reported on staghorn sumac (R. typhina). 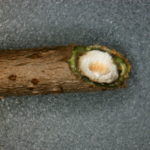 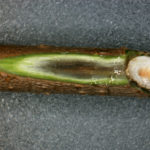 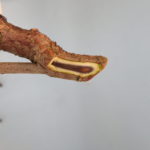 Fungicides are not effective in this situation since the fungus resides in the soil and cannot be effectively eliminated. With this type of soil-borne disease we often get asked whether one may get rid of the problem by removing and replacing soil. Practical experience suggests it is nearly impossible to remove all traces of infested soil and the planting bed can easily become infested again from neighboring areas. The main recommendations in this situation are to plant a different type of shrub in the affected area and to avoid moving soil from this area to other areas with sumac. Clean shovels, other tools and boots by removing all soil with a wire brush before leaving the contaminated site then scrub tools with soap and water before using them elsewhere.

The Fusarium strain present is unlikely to attack other types of plants so replanting with other shrubs/ground covers should be okay. Shrubs such as deutzia, landscape roses, juniper, nine-bark (modern powdery mildew resistant types) or spirea are just some of the potential replacements.