Although most “conifers” are “evergreen”, a few species are “deciduous”. Confused? Perhaps a review of these terms will help.

Evergreens provide green color all year long but that doesn’t mean that the individual needles live forever. Evergreens shed their older needles to make room for new growth, but what makes these plants evergreen is that they retain some foliage all year long instead of shedding all of the leaves at once.

Some species of evergreens have a more noticeable leaf drop than others. In autumn, white pine will drop many of their 2-year old needles all at once, which can be quite alarming if you don’t realize that it’s perfectly normal.  Arborvitae also has a very noticeable needle shed as older branchlets turn brown and remain on the tree for a while before shedding. 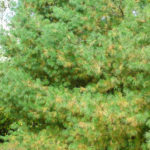 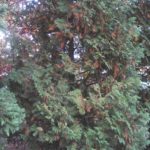 How to distinguish this from winter desiccation injury or severe drought injury?  The biggest difference is in the pattern of which needles are browning.  For normal needle shed, it is the oldest, innermost needles.  For winter injury and drought, it is more likely to affect the younger, more outward exposed needles. Or a pattern of progression of the browning if one is paying close enough attention.

The older needles of yew shrubs will turn yellow and drop in late spring or early summer. Broad-leaved evergreens such as rhododendrons drop their 2- to 3-year-old leaves in late summer and early fall.

On other species, needle drop occurs gradually with a small number of needles through the year and is less noticeable. 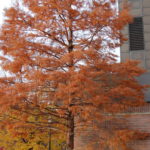 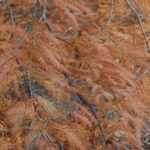 Hot, dry weather can cause many plants to drop needles early. Inner and lower needles are the oldest. So if your evergreens appear to be losing large numbers of needles, check to see if there is a uniform pattern of which needles are dropping.  And if it is a white pine or arborvitae in autumn, they are most likely just doing what comes naturally.

The deciduous conifers we are most likely to see in our area include bald cypress (Taxodium distichum) and larch (Larix sp.) and occasionally dawn redwood (Metasequoia glyptostroboides). They have striking yellow to orange to reddish brown fall color when all of the needles turn simultaneously. 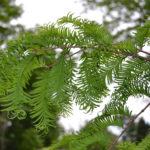 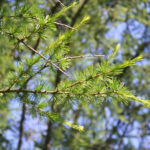 Metasequoia has opposite needle arrangement on deciduous branchlets.

Larix has many (30-40) needles attached in bundles on short spurs.