Spring provides a great opportunity to kill insects that winter in vulnerable stages on leafless twigs, or on last year’s hardened off evergreen leaves or needles. The absence of tender leaf tissue makes it possible to use higher concentrations of oil that can kill insects without harming the plant. Dormant oil applications can have the added advantage of protecting beneficial insects and pollinators that are not active on these plants during the dormant season.

What is a Dormant oil application and how does it kill insects?

When in the Dormant season can oils be used?

Apply oil to trees and shrubs with an historical problem of mites, armored scales or woolly aphids during the dormant season before trees and shrubs break dormancy. Temperatures must be above 40˚ F for 24 h and < 70 ˚ F. In the southern part of the state applications can be made as early as February, whereas in more northern areas the sprays can be applied in March.  Oil can strip the wax from the needles of blue needled evergreens, including some spruce, junipers and cedars and turn them green.  In some cases this can result in leaf burn.  Chances of leaf burn are less when applications are made in spring that late fall.  This is because the new leaf growth in spring can shade the oil treated leaves and shelter them from the drying effects of wind.  Red maples and black walnuts can also be burned by dormant oil applications. Do not apply with sulfur containing pesticides.  See the pesticide label for a complete list of susceptible plants. 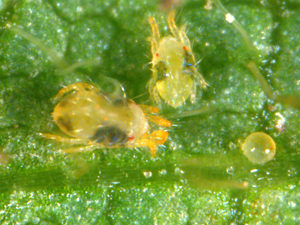 Which insects are most easily killed by dormant applications?

Spider mites: (Figure 1)  All stages that winter on plants are readily killed by dormant applications of oil.  Most notable species include honeylocust spider mite, European red mite and spruce spider mite.  Because these applications can also kill some natural enemies, it is best to limit applications to plants that had severe outbreaks last fall.

Armored scales who do not winter as eggs: (Figure 2)

Only armored scales can be controlled by applications of oil in the dormant season. Those species that winter as eggs (oystershell scale, some pine needle scales) can survive sprays of oil because only the top layers of eggs are killed. In contrast, those scales that winter as adult females or immatures (euonymus scale, San Jose scale, and obscure scale).  Control of Japanese maple scale with dormant oil is difficult because many can winter with an extra layer of shell under their waxy covers.  Soft scales that produce honeydew like calico, and tuliptree scale cannot be controlled by applications of oils. 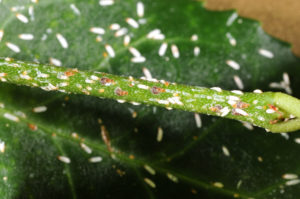 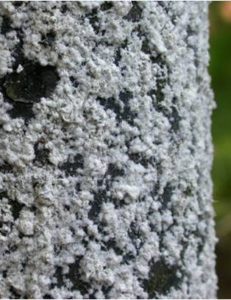 Woolly Aphids that winter as adults or immatures: (Figure 3)  Pine bark adelgids, and woolly apple aphids are aphid like insects that winter on the trunk of pine and apple trees.  Application of oil will dissolve their waxy wool and kill them.

Research article on efficacy of oils and soaps against scale insects.