Once common only in Indianapolis the southern part of our state, bagworm caterpillars are defoliating trees and shrubs throughout Indiana. Cold temperatures that kept these pests in check north of Indianapolis are becoming less frequent due to the warming effects of urban development. Although typically associated with evergreen trees and shrubs, like junipers and spruce, they are becoming increasingly common on common deciduous trees including maples, oak, elm and honeylocust. In the last few weeks before they become adults, large bagworms can cause significant amounts of damage. 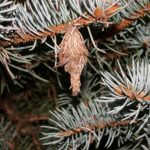 Fig. 1 Bagworms that have tied themselves to twigs can no longer be killed by applications of foliar insecticides because they have stopped feeding. 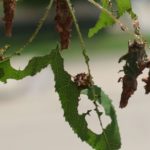 Fig. 2 Bagworms feed on leaf tissue between the veins of maple trees and cover themselves with bits of leaves. 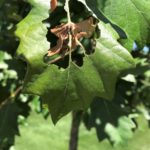 Fig. 3 Even oak leaves can be consumed by bagworm caterpillars. 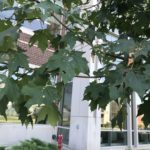 Fig. 4 Deciduous trees planted near bagworm-infested juniper are likely to get attacked by bagworms.

Bagworm life cycle
Bagworms are flightless moths who spend the winter as eggs laid by their mother in silken cases covered with dried leaves. Eggs hatch into caterpillars from mid-May to Early June. Caterpillars will crawl to tree tops and blow up to 30 feet to nearby plants. As caterpillars feed they cover themselves with leaves to protect themselves from birds. Caterpillars feed through mid August before they become adults. . Wingless adult females remain in their bags allowing winged males to fly to them to mate. After mating the females will lay eggs in the silken sack where bagworms spend the winter.

Late Season Management of Bagworms
If most of the caterpillars are still feeding you can control the problem with a foliar spray of an insecticide. Spinosad (Fertilome Borer and Bagworm killer, Captain Jack’s Deadbug) are still very effective at killing caterpillars who eat treated foliage. If most of the bagworms have stopped feeding, then you are better off waiting until next May or June to kill the young caterpillars with insecticide. If there are only a few bags on the tree, and you can reach them, then you can pick them off.

Use the Purdue Tree Doctor app to get a diagnosis and a recommendation for bagworms and other pests.