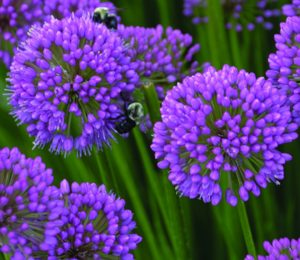 ‘Millenium’ is a hybrid Allium selected for late flowering. It has masses of rose-purple blooms; a uniform habit; and neat, shiny, green foliage that remains attractive long after blooms have faded. It is also known for its resistance to drought.

The upright foliage clump of grass-like, glossy, deep-green leaves reaches 10-15 inches tall in spring. In midsummer, two or three flower stalks rise above the foliage, and each produces two or three showy globes of rose-purple florets that last as long as four weeks. They dry to a light tan, often holding a blush of their former rose-purple color.

‘Millenium’ is just about the perfect low-maintenance perennial for full sun. Once established, about the only maintenance it needs is cutting back foliage in late fall after the plants fade. This plant is hardy to USDA zones 4-9 (possibly zone 3), which makes it a great choice throughout the Midwest. No serious pest problems have been reported, though leaf spot may occur in overcrowded growing conditions with decreased air circulation. Deer and rabbits appear to avoid browsing.

‘Millenium’ has a clump habit with a fibrous root system, which makes it easy to propagate by division in either spring or fall.

The Perennial Plant Association selects a different perennial plant each year to promote throughout the nursery and gardening industry. PPA members nominate plants based on several criteria, including low maintenance needs, adaptability to a wide range of climates, pest and disease resistance, wide availability, multiple seasons of interest, and ease of propagation. A selection committee then narrows the field to three or four choices from which the members cast their votes.

For more information about the Perennial of the Year program, see www.perennialplant.org.